In the years leading up to the incorporation of NCB in 1952 there were a string of maritime
disasters brought about by the shipment of dangerous goods like ammonium nitrate, a very
common cargo used as fertilizer or an explosive.

How has NCB helped?
In 1952 the National Cargo Bureau was incorporated as a not for profit organization to assist the United States Coast Guard in discharging its responsibilities under the 1948 International Convention for Safety of Life at Sea (superseded by the 1960 and 1974 Safety of Life at Sea Conventions). NCB is a continuation and amplification on a broader base of inspection  services formerly performed by the Board of Underwriters of New York and the Board of  Marine Underwriters of San Francisco, with a mission of Safety of Life and Cargo at Sea. With offices in 18 US port locations, NCB can operate on a nationwide basis helping to enhance safety and ensure compliance with regulations through inspection and surveying activities predominantly relating to hazardous materials incidents and the stability of ships carrying bulk cargoes.

Certificates issued by NCB for bulk cargoes may be accepted as evidence of compliance with the IMSBC Code and US regulations under 46 CFR. As part of its remit, NCB has also  developed training courses to inform and educate in an effort to prevent incidents before they occur. The United States Coast Guard approves NCB’s range of self-study courses and offers sea service credits to students who complete the courses satisfactorily.

Digital solutions and data
It is impossible to inspect every container because of the sheer volume of traffic. Using a
projection based on container cargo inspection data collected by National Cargo Bureau, it is estimated that there are more than 500,000 containers shipped annually with poorly packaged or stowed DG. Poor packaging or stowing can lead to leaks and/or fires. In 2018 NCB joined forces with UK-based Exis Technologies, global leaders in IT solutions for the management of dangerous goods in sea transport. With the help of industry partners, like CINS  (www.cinsnet.com), they are helping to tackle the issues at the root of ship fires, like poor stowage, and misdeclared/undeclared DG with new digital tools.

Hazcheck Inspections was launched in 2018, a web-based container inspections database and access portal, which now has an excess of 100,000 data records and is constantly growing. In the same year, following the Maersk Honam fire, Maersk contacted NCB to ask them to inspect 100 inbound containers. To collect more meaningful data, NCB offered 500 container inspections to the 5 board members of CINS as part of a Container Inspection Safety Initiative. High inspection fail rates highlighted the problems of improperly packed
containers and other issues. As a result, NCB produced a White Paper setting out 12 holistic approach recommendations for shipping lines.

In 2020, Hazcheck Detect, a new realtime cargo screening tool that allows non-compliant cargo to be viewed within seconds was launched. The tool, which identifies undeclared and
misdeclared cargo, stops containers from being loaded onto ships that previously could have been the cause of a ship fire. Each month 15 million bookings are screened and 30,000 suspicious cargos detected. This stops 40-50 containers from being loaded each week. Maersk was the tool’s first customer, followed by ONE and Hapag Lloyd.

In 2021, NCB started to carry out remote inspections. The team of NCB surveyors, who offer decades of container inspection experience, are now able to review and inspect container transport units remotely, using a live video option, based on the material the client captures and uploads to the platform on their mobile phone. Inspections are possible on a global scale particularly in locations where dangerous goods expertise may not be available. To date, NCB has carried out remote inspections for Evergreen, Maersk and Hapag Lloyd.

The last 70 years has seen an incredible amount of progress regarding both regulations and technology. Moving forward through the next decade, data sets collected from the new tools, along with machine learning and AI techniques, will be able to improve the detection of invalid and dangerous shipment by creating new rules and search terms. 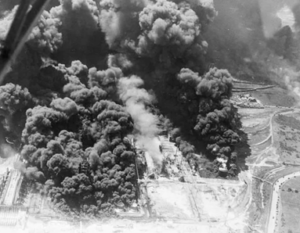 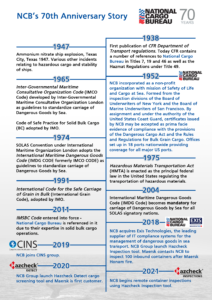