National Cargo Bureau was incorporated as a non-profit organization in May 1952 and began its actual operation on November 19, 1952. The Bureau was created to render assistance to the United States Coast Guard in discharging its responsibilities under the 1948 International Convention for Safety of Life at Sea* and for other purposes closely related thereto.

By assignment and under the authority of the United States Coast Guard, the certificates issued by National Cargo Bureau, Inc. may be accepted as a prima facie evidence of compliance with the provisions of the Dangerous Cargo Act and the Rules and Regulations for Bulk Grain Cargo. 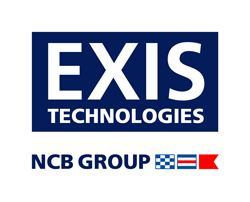 FOUR YEARS TOGETHER AS THE NCB GROUP

Exis Technologies Limited has been the software division of National Cargo Bureau since 2018. They are a leading supplier of IT systems for the management of dangerous goods in sea transport. They have over 35 years’ experience of supporting major shipping lines, ferry operators, ports and terminals, logistics operators, freight forwarders, government and regulatory organisations worldwide. Together National Cargo Bureau and Exis Technologies form the NCB Group with a not for profit mission of Safety of Life and Cargo at Sea.

Our Mission...
Safety of Life and Cargo at Sea